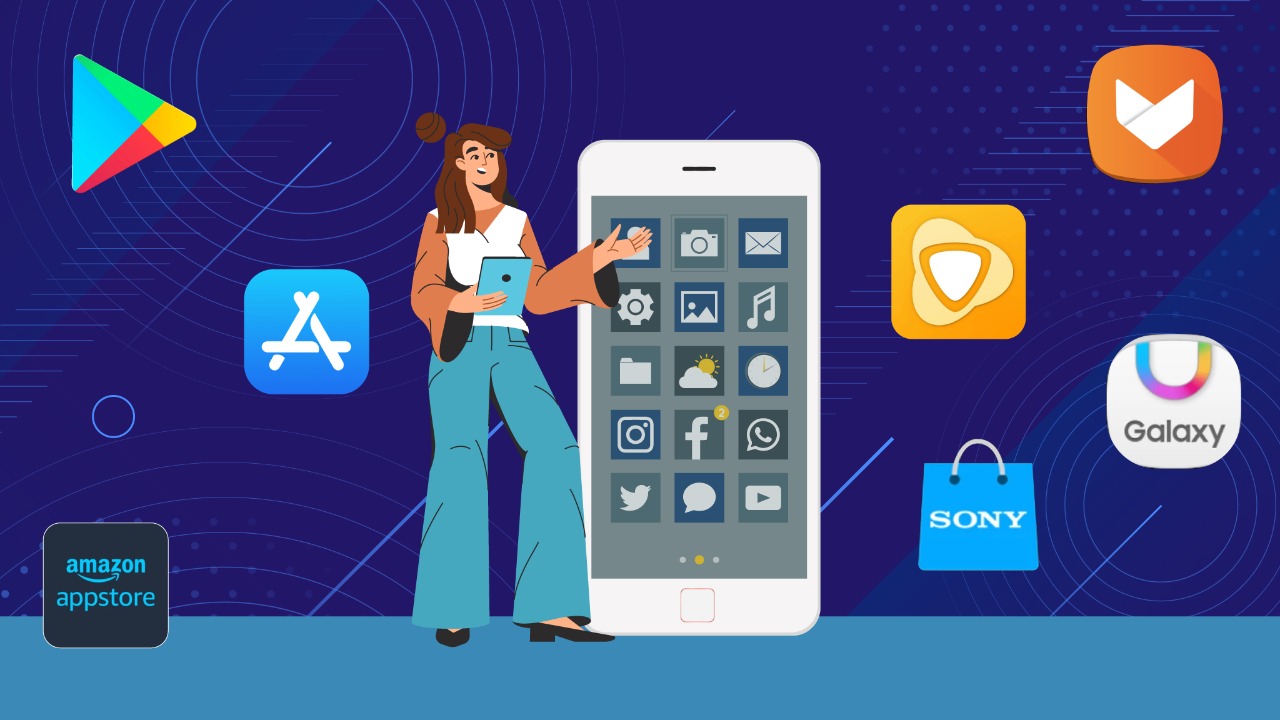 As a business owner, it is usual to try to garner the attention of 3 billion monthly active Android users and over 1 billion iPhone users worldwide. When it comes to mobile app stores, most people think there are only two types, Google Play Store for android apps and App Store for iOS apps. While Google Play Store and App Store have gained widespread recognition, they aren’t the only mobile app stores with free apps.

However, to achieve peak downloads and stay relevant with all smartphone operating systems, you must launch your mobile apps on stores other than Android and iOS. Of course, launching on alternative mobile app stores isn’t as profitable of a revenue share model as Google Play Store or App Store, but it does offer more lucrative app deals. Cumulatively, getting your app on all the popular app stores is one way to ensure maximum user traction and download rates.

Why go for an alternative mobile app store?

Mobile app stores are designed for specific genres and niches and serve particular markets. Considering the visibility your business gains when you upload an app to Play Store or App Store is why many consumers don’t know about other available app store options. However, with the right app store optimization strategies, you can employ all app stores to boost brand awareness. The following are some advantages of going for alternative app stores. These include:

Now that you know the potential opportunities and benefits of mobile app stores and how your investment can be more discoverable on alternative app stores, we explore the marketplaces that will offer you a wider reach and higher downloads.

As one of the first marketplaces launched since the conception of mobile app stores, Google PlayStore is the No.1 choice of business owners for all sorts of content like movies, TV series, music, magazines, books, etc. Since it caters to a broader group of people, the number of apps published under its banner head is about 3.6 million as of 2021. The best part, over 96% of apps on PlayStore are free for users to download.

Google Play Store possess robust search capabilities that make it easy for consumers to find apps that serve their needs. If you practice the correct app store optimization strategies, you’ll be on top of the charts and boost your downloads. Make sure you choose the right category while publishing your apps that correspond with your product niche and business model.

When it comes to hosting mobile apps on marketplaces, Apple App Store is not far behind its competitor, Google PlayStore. Reports suggest that over 3.3 million apps and games are in its marketplace for an extended line of Apple devices like smartwatches, Apple TV, etc., all available for free.

App Store is known for its engaging and personalized experiences, not to mention that the quality of apps differs from PlayStore. Unlike the Android store, App Store has strict rules and regulations that apps must follow and comply with. It is why users can be sure of the security and safety of information while downloading an app from the iOS store.

It hosts apps for android users and other official Amazon devices like Fire TV, Fire Phone, Fire Tablets, etc. As of 2021, more than 470,000 apps are available on Amazon App Store. Like Apple, Amazon also has stringent uploading policies, and once you’re about to crash it, you can use the apps on any of your android devices for free.

While users aren’t aware of this, there is an official marketplace for Samsung devices that delivers excellent user experiences throughout the extended Samsung devices, Galaxy tablets, smartphones, and wearables as one of the most in-demand mobile brands. Samsung Store is a good investment for mobile app business owners.

Although there are not many Sony phones nowadays, the company still launches apps specific to its niches like Smart TVs, Internet, Streaming, and more. All these apps are designed to offer the full entertainment experience. However, the app store caters to only Sony users, and you can only upload apps native to its operating system rather than a generic version available on the PlayStore.

An independent App Store for Android, it displays apps that can be used for gaming, productivity, other store apps, etc. Like Android, it does not have a particular niche to cater to and doesn’t offer much competition. However, several users do access Aptoide, so it covers your business in terms of the customer base.

Founded in 2004, it is an independent marketplace with over 2 billion mobile apps hosted on its platform. The best part is that over 3 million apps are downloaded from GetJar daily. Used mainly by developers, the app store supports Android and iOS apps and some versions of the older Windows mobile. Hosting apps on GetJar is not an expensive procedure, which is why several business owners employ it.

Although most of the above-mentioned app stores are not pre-installed on mobile phones, they host many cross-platform users.

That is why publishing your apps on these above app stores  is an excellent first step if you want to accelerate business growth .

Mypcot Infotech is a leading Mobile app development company in Mumbai. If you are looking to personalized apps and efficiently meet your business goals., you can send us a business inquiry at sales@mypcot.com